There is a new creature crawling around festivals this year and she comes from a galaxy far away bringing good vibes and enchanting lights. Her name is Gertie the Galactic Arachnid and through the assistance of 12 humanoids she is brought to life. She made her debut at Treefort music festival in Boise, where her earth life began by the mind of artist and entrepreneur, Sam Johnson.

Through a collective effort from full-hearted earthlings, she walks her way through crowds leaving them mesmerized by LED lights and furry limbs. Her eyes are endless portals into your favorite trip and her belly holds some pretty miraculous engineering. In a special showcase for Magic Sword’s set at Treefort, she wowed the crowd. Kids and adults alike were full of wonder with this massive spider who knows how to party. During Sensory Illumination, a Burning Man fundraiser and one night festival in Boise, She was the guardian of the Silent Disco. Because her lights are programmable from a cellular device, she is an active art installation while she rests her legs, but when she starts her trek down the street, the movement is alluring and graceful and impossible to not be in awe of.

Gertie also just had a big weekend at What The Festival at Wolf Run Ranch making her walkabout for Thievery Corporation’s and Bonobo’s sets. With unlimited combinations for a light show and dreams of bringing joy to many humans, she is just getting her start this summer. Keep your eyes open and you just may catch a sight of her psychedelic spidey self! 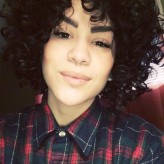 Luna Reyna (she/ella) is the founder of RIZE Entertainment. She has worked in radio, in print for multiple magazines and with too many digital media platforms to count. She is deeply invested in shifting power structures and centering the work and voices of marginalized communities within the industry.

Keytar Riffs and Organic Soundscapes | An Interview with ill-Esha