Sasquatch! Music Festival lasts three days for most attendees, but the artists themselves are often onsite for mere hours. Despite their limited time to rehearse performances or admire the Gorge’s expansive scenery, Earthlings Entertainment managed to catch up—with several of the weekend’s most exciting artists.

On day two, Seattle instrumental funk band Polyrhythmics played one of the earliest but most memorable shows on the Bigfoot stage, premiering several new tracks from a recent band retreat before covering Tears for Fears’ “Everybody Wants to Rule the World.” A couple hours later, Dope talked and smoked with guitarist Ben Bloom as well as percussionists Karl Olson and Grant Schroff—stage name Champagne Bubblebath.

Earthlings Entertainment: I saw you guys premiere a couple new songs during your set. Are you excited to tour with them?

Ben Bloom: Yeah, the last record we put out, we didn’t play much of that music before we recorded it. We recorded it, then started playing it live, which was different from what we’ve done in the past. This record we’re going back to the old way, introducing new songs and letting them grow into whatever they’re going to become.

EE: Like incorporating the audience reactions into you songwriting too?

Ben Bloom: Yeah, and the way our band works is, we don’t have a lot of rehearsal time at home in Seattle. We’re traveling so much, so a lot of the time, these sets are where the songs really start to evolve. That takes anywhere from a month to a year for them to fully reach their arc.

Grant Schroff: Sometimes it can take a while for things to all fall in place because there’s so many parts happening. We’ll have a rough idea for a song, but there’s all those little parts that fill in cracks.

Ben Bloom: And sometimes crowd reaction too, If crowds are vibing to certain things, like, when we played it slower, we noticed a big difference in the hips. If the hips are moving, that’s the barometer, you know.

EE: So if you’re strapped for rehearsal time, how did you find time to work on these new tracks? Was that the one at the Skykomish cabins?

Ben Bloom: Yeah, right at the end of the year, we took a few days up in the woods and wrote a whole bunch of new songs that we’ve been getting into more finished states through soundchecks and rehearsals. We have a bunch more than we’re starting to introduce.

Grant Schroff: Isolation is key. Being out in the middle of nowhere in the snow. No one has to show up late or leave early from rehearsal cause we’re all there all day.

EE: You also did a retreat near Mt. Hood to develop your last album, Caldera. Have you started doing that just recently?

Grant Schroff: This is the second time we’ve done it. As we were doing the Caldera one, we got more stuff done in three days than we could in months of trying to schedule weekly rehearsals.

EE: What influence does cannabis play on your guys’ songwriting process?

Grant Schroff: I’ll let these guys take that one.

Ben Bloom: Here’s the secret—Champagne Bubblebath is the biggest toker in the band. [Laughs] Cannabis is important to us, it’s an active part of our ritual, both for traveling, creative spaces, bonding. We all come from different backgrounds, and some of us come from pretty strong cannabis backgrounds. It’s one of those things that ties musicians together on the road. We toured with the band Ghost Note recently, and one of the things they said right before we went on this two week tour was, ‘Oh you guys smoke weed—we’re gonna get along just fine.’ Sometimes you need to change your perspective, and cannabis does that for us, whether it’s going into a writing or studio session.

Grant Schroff: I would add to that that it’s very important to self-medicate when in the resentment incubator—aka tour van. That chills everybody out.

Ben Bloom: It’s been nice since the whole West Coast is legal, the paranoia of weed enthusiasts traveling is kind of gone.

EE: And what are the different band members’ background in cannabis?

Ben Bloom: I worked for a company for a while called House of Cultivar, and have done a lot of cannabis-related activities throughout my whole life, mostly genetics. I’d say it’s a little bit self-medicating as well. I’m not a big drinker, I have pretty big attention deficit disorder and don’t take any other medications at all. Cannabis and coffee are the two things that make my day go. Cannabis was one of those substances that, once the door opened for me, it never closed. We’ve written songs about it and we’ve played around the plant as much as we can. Now we just need some of that cannabis industry money.

EE: How’d you start the tradition of discussing your setlist before every show?

BB: In general, someone will put together a setlist, text it out to everybody, and then people will give their input on it. Everything is so democratic in our band, sometimes decisions can take a very long time, but you have to be patient.

Ben Bloom: It’s just one of those things where someone will have an idea, and we’ll run with that, and that’ll get molded in different ways depending on preference.

EE: It’s cool that the band has that equalitarian dynamic, like without a singer, you’re all put on more equal footing.

BB: The thing about it too is that we play a lot of shows, and it’s really important for us to be having a good time, cause there is no singer to hype up the crowd. When people see the band excited to play the music that they’re playing, that’s another level of production that’s not really spoken about. Part of keeping the sets fresh and playing new music every night for the band, like what’s everybody feeling today? There are songs you just don’t feel like playing some days, and we want to get those out of the way, so that when we’re playing together for that one hour after driving 14 hours to get there, we’re really enjoying the shit out of it, because that’s why we’re there.

Grant Schoff: We don’t want to be one of those bands that just play their one and only set, because that’s how you get burnt out. Our music has a lot of improvisational aspects that make each tune different each time, so that also keeps things fresh.

EE: How does the response you get vary touring across the country? Living in Seattle, I’d imagine that’s where it’s hardest to get people dancing.

Grant Schoff: We have a pocket in Seattle, though, that gets the fuck down.

Ben Bloom: I think we started it actually. [Laughs] It was as much a surprise to us as it was to everyone else that people showed up to our shows and were dancing to that music. I feel like Seattle needed that invitation to dance.

Karl Olson: Traveling down the West Coast is interesting, because Washington to Oregon to California, it’s all one thing, but there’s a spectrum of different kinds of hippie all the way down. We’ve got a great response on the East Coast too.

BB: My favorite places to play so far are in the South. I feel like when we go to New Orleans, Texas, or North Carolina—these places that are so foreign to us culturally and geographically—that the music feels really fresh, and the responses have been really amazing. Overall, I think the country’s smaller than it used to be, because scenes translate through the internet.

EE: When you guys tour, do you often have to crash on people’s couches?

Ben Bloom: Yeah, you got any good recommendations? [Laughs] With this band and so many people, we try as best we can to make it as comfortable as possible. When we can afford hotels, we do hotels. When we have a host who can put us up, we love to take advantage of that.

Karl Olson: There’s some amazing people scattered around. They’re so generous, and they genuinely do it out of the kindness of their heart.

Grant Schoff: You get to meet some pretty amazing people that have pretty crazy spaces they live. You find yourself in situations, like in some huge warehouse with recording studio upstairs and all this crazy shit you’d never see if you weren’t on tour.

Karl Olson: Some are musicians, and some are just music lovers.

Ben Bloom:They’re people who the switch has been flipped for, and they’re like, art is important, and I want to support it in any way I can. All of us have done that in some way, we’ve realized the value of art—otherwise we wouldn’t have sacrificed all the things we have to do what we’re doing. 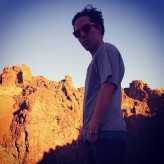 Protest Music Gets Meta at Sasquatch! Day One