It was early 2014, a roller derby friend asked me out on a real date to go see a band that I also loved. It was our first date. We showed up early to see the band Diego’s Umbrella. That’s when we discovered the opening band and they blew us away. We fell in love with the music then, and each other the following year, so we spent six months trying to book Con Brio for our wedding.

Con Brio pulls together every piece of the puzzle and produces a sound that’s tight and takes flight. The pilot Ziek McCarter is a pure soul and the true American heartbeat that this country desperately needs right now. With a voice like Marvin Gaye and moves like James Brown, McCarter takes the audience along for the ride. Con Brio is the band that we’ve been missing, looking for, and dreaming of.

Feeding off McCarter’s energy, Brendan Liu is the punk rock pogo-stick trumpet player who is just as much Flea as he is Louie Armstrong. The youngest member of the band, Liu is the pipeline to the excitement and reminds the audience it’s okay to get your ass up and dance.

Probably the most dangerous member of the band (rumor has it, he’s a high ranking member of the UK’s MI6 — SIS or Secret Intelligence Service), the acid jazz 007 if you will — Saxophone player Marcus Stephens is all the sexiness of the Commodores combined with the skills of Ornette Coleman. The man of mystery with a mission.

Gifted and twisted at a young age, if Mo-Town and SubPop had a baby, it would be Benjamin Andrews. An exquisite guitar player with the lyrical skills of Paul Westerberg of The Replacements and the angelic talent of Hendrix.

And when it comes to the beat and the heartthrob, George Clooney look-a-like, Andrew Laubacher produces the positive pulse with a smile and thump that comes straight from his core.

However, they wouldn’t make it out of the parking lot if it were not for the glue that holds this band together. His nickname even sounds solid — KIRCH. Not only does bassist Jonathan Kirchner provide each and every funky bass line that sets the dance floor on fire, but he also makes sure every band member gets on stage, and merchandise is handled. A gentle giant who is just as much a papa bear as he is a bass master of funk.

Last but far from least, our favorite newest addition to Con Brio, PATMAN! The Hebrew Herby Hancock. Pat Monaco Glynn AKA Patman, is the sweet citrus to the Con Brio cocktail. Refreshing, bright, light and zingy. He splashes over the keyboards like a meteor shower on a slip-n-slide.

Con Brio’s third album Explorer is exceptional. But you need to see them live to feel the full effect of their sound. Much like our wedding, at the end of their shows, your life will be better than it was when you arrived. If there is any band you should see live, Con Brio is without a doubt, the one. It will change your life too. 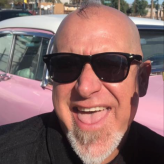