As the demand for cannabis rises nationally, there are several organizations in the U.S. educating people on the medical, economic, and environmental benefits of hemp. However, there is one organization that expands globally, connecting over 830 cities in 72 different countries. The Global Marijuana March is an event that has taken place every first Sunday in May since 1999. Depending on where you live it may be known by different names such as World Cannabis Day, Cannabis Liberation Day, and even Ganja Day but locally it is referred to as the Boise Global Marijuana March. Participants unite to promote, discuss, and educate the public on the benefits of cannabis. This years Boise Marijuana March did exactly that.

People began gathering outside the Boise Art Museum around 1 pm to start making signs for the rally. Once a sign was made protesters would then line up along the sidewalk of Capitol Boulevard facing the street. The constant honking of passing cars was a strong indication that a great deal of Boise citizens support cannabis legalization. As 4 pm approached protestors started marching toward the Capitol Building. A megaphone was passed around as people took turns improvising various chants such as “We’re patients not criminals!” and “You can’t spell healthcare without THC!” 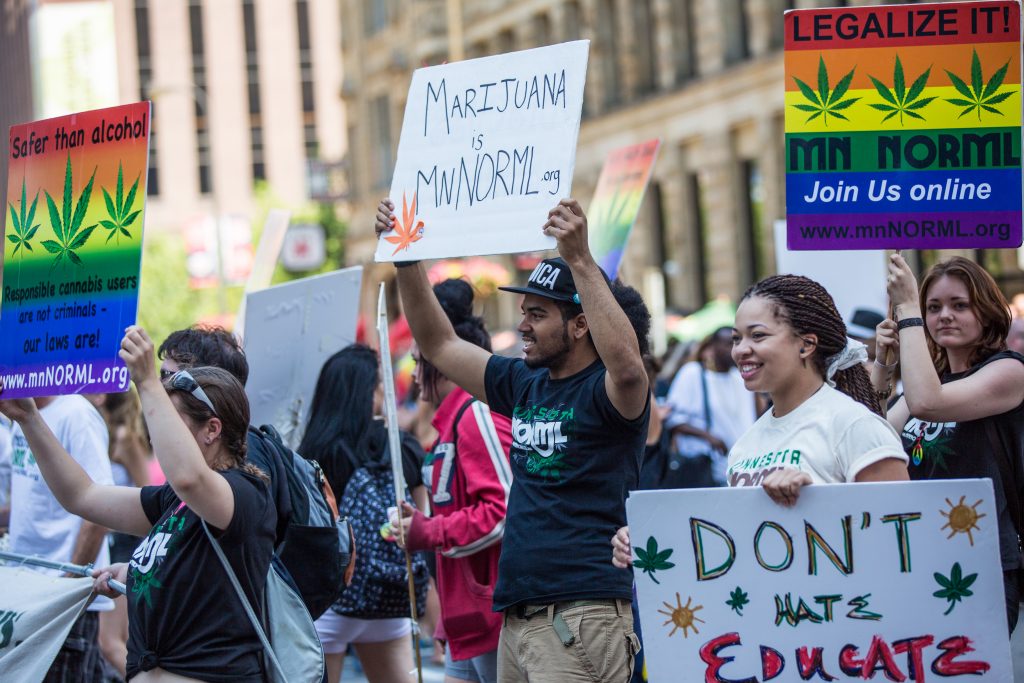 The march reached its destination of the Capitol Building steps at about 4:15 just in time for the speakers to begin promptly at 4:20. An activist from the Mom’s for Marijuana organization spoke into the megaphone sharing stories about medical hardships she and her family have endured due to the prohibition laws in Idaho. She also discussed the potential for hemp to replace oil based fuel and plastic.

Other people took their turns sharing as well. One individual explained how they have tried several medications for epileptic seizures, and even though cannabis is the best-known medicine, he can’t get it in his home state because of the current laws. Another person discussed the environmental destruction that plastic and paper production has caused, addressing  Deforestation and the Great Pacific Garbage Patch which have caused the rapid extinction of certain species of life on earth. More protesters brought up concerns about plastic and pointed out that plastic made from hemp biodegrades in 80 days and all the paper materials we use can be made from hemp. This would mean we can stop destroying our forests that are also home to so many other plants and animals, all of which are just as crucial to earths ecosystems as the trees themselves.

Since the Global Marijuana March’s debut in 1999 there has been noticeable progress toward the end of prohibition on a state wide level. Colorado alone has shown huge economic benefits from legalization, with much of the profit going toward education. We still have a long way to go politically before we can achieve what some other states have and we need more active voices to make a difference. If you weren’t there this year, make sure to come show your support next May!

Protest Music Gets Meta at Sasquatch! Day One

Where Did We Sit on the Bus? : A Story of Self Discovery