CannabisCultureInterviews
May 11, 2018 by Luna Reyna

Many of us hear the phrase “tissue culture propagation” and completely zone out. Scientific jargon is as confusing as it is important, which is why the experts at Front Range Biosciences (FRB) have been working to create tissue cultures, a technique used to produce clones of a plant to breed disease-free, disease-resistant, high-yielding plants. Leading the charge is Dr. Cecilia Zapata.

Dr. Zapata grew up in Caracas, Venezuela, where she first discovered her love for science. “I always wanted to be a scientist,” Zapata told us. But not everyone thought she should pursue her dream. “I studied in a school with only females,” she reveals, “a Catholic school, and when I said that I wanted to do agronomy, they said, ‘This is a man’s career.’ I said, ‘No, I don’t think there are men or women’s careers, just careers.’ My father gave us opportunities and he pushed us the same way. I didn’t see any difference between the way my brothers were treated and the way I was treated.” But she understood this wasn’t the case for most families in Caracas. “At a certain point [when] you try to challenge the boys—especially in my country—people look at you like, ‘What are you talking about? How could you even dare to challenge a man?’” 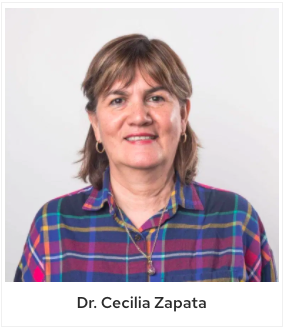 With her family’s support, Zapata stuck with her passion, and throughout college she had mentors who continued the encouragement she received as a girl. “One of my major professors at Texas A&M was a woman, and she inspired me,” Zapata recalls fondly. “She was the only woman that was a professor in my department then. She told me that they always made comments about her,” She said, ‘You just ignore it. You just keep going. You are strong enough. You are going to succeed.’”

And succeed she has. Zapata worked as Laboratory Manager with Driscoll’s, which controls about a third of America’s berry market, and as a Laboratory Manager for Ball Horticulture, a world leader in plant development and distribution. Today, she’s taking her twenty-five years of experience and applying it to the cannabis industry: she’s the Director of Tissue Culture Production at FRB, which recently made headlines with their genomics research. They hope to discover the full potential of medicinal cannabis. “It really excited me a lot to bring new knowledge to a new industry,” she told us. “I’ve done a lot already in my life, in big, important companies, so I decided to do something totally different.”

Zapata’s work with FRB is changing the dynamic of the field. Her knowledge and experience delivers innovative scientific developments and creates a more inclusive workplace. Out of Dr. Zapata’s fourteen-person lab team, thirteen are women who hail from all around the world. “I’m trying to get people from different backgrounds so that I can have a diverse group,” Zapata maintains. “That’s something I want to encourage all companies to do. I am trying to start that culture here.”

American STEM (science, technology, engineering, math) fields have always been boys’ clubs. According to the Census Bureau’s American Community Survey and the Pew Research Center, it’s more dire than we may have thought.

79.2%: Salary percentage of what women in U.S. STEM occupations made in 2016, as compared to their male counterparts’ median salaries.

50%: Percentage of STEM women who have “experienced gender discrimination at work.”

36%: Percentage of STEM women who say they have “experienced or witnessed sexual harassment” at work.

Herizen Guardiola Of Netflix’s “The Get Down”

THUG LIFE OR NUG LIFE: EQUITY PROGRAMS REPAIR SOME DAMAGE OF THE WAR ON DRUGS